Sukhothai is located on the east bank of the Yom River. If you take the train from Bangkok to Phitsanulok and then take the bus to Sukhothai, the distance is 545 kilometers. On the north and west side of the city there are low mountains, which gradually descend to the south and east to the flat land with individual hills.

The old town of Sukhothai is 12 kilometers west of the current town hall. The area has been declared a national historical park.

In 1238 the Sukhothai Empire was founded by King Por Khun Sri Intharathit after the Fall of the Khmer. During this time a total of nine kings ruled.

The empire reached its peak during the reign of the third king, Ramkhamhaeng the Great, who exercised his power and the influence of Sukhothai over large areas. After the reign of the 6th King, this power slowly declined, perhaps because of the rise of the southern Ayutthaya.

In 1438 Sukhothai was attached and administered by Ayutthaya. The old town of Sukhothai is 1.4 kilometers by 1.8 kilometers and has 4 entrance gates.

The city has a large lake and 21 historical sights. Within a radius of 5 kilometers there are still 70 historical sites to visit, for the most part religious monuments of Buddhist and Hindu importance.

The temples in Sukhothai vary from Prang to Stupa, Mondop to Vihan. The Stupas represent three main styles:

Most buildings consist of laterite (for the base and column), bricks (for the wall and column base of the statues), wood and earth (for the roof framework and the roof) with individual plates made of porcelain.

The Ramkhamhaeng National Museum which is also partly an open-air museum. It was opened to the public in 1964. The museum contains special art articles that were used during the main restoration of the old town.

Porcelain pieces from China found in the crypt of several Stupas.

The open-air museum mostly exhibits works of art made of stone from the Sukhothai period, including the elephant caryatids from Wat Chang Lom and Wat Chang Rob in Sukhothai, Sri Satchanalai, Khampaeng Phet and the model of a kiln from the island of Noi outside Sri Satchanalai.

Surrounded by a pond, this temple is considered to be the largest and most important temple in the old city.

Apparently it was a royal temple of the same importance as Wat Phra Sri San Phet during the Ayutthaya period and the temple of the Emerald Buddha in the Bangkok period, since the living quarters of the monks – according to a thorough search by Prince Damrong Rachanupab – are not present in the temple.

There are many buildings on the site of the temple: 200 ruins of stupas, 10 Vihan foundations, 8 vestibules where statues of Buddha are set up and a Bot foundation. Some of these structures were built during the former rule of the Sukhothai king : some were probably built afterwards during later rule periods.

The main monument of this temple is a large Stupa in the lotus flower style, surrounded by four smaller axial stupas of the Srivichai style and four prangs, which imitate the Khmer style.

These Stupa stand on a square base that recedes in three rows, the middle row has niches around the four corners on which there are statues of Buddha.

The bottom row supports your devotion “Taksinawat” meant walk clockwise in a circle. To the east of the main Vihan is a large Vihan in which a huge seated Buddha figure, Phra Sri Sakayamuni, was placed. This is currently in Wat Suthat in Bangkok. Another building is a Mondop, which contains a Buddha figure made of brick and stucco.

East of Wat Maha That, there is a small hill, in the south-western corner of which you can find a foundation made of rectangular brick 1.50 meters high.

It is said that this fragment of a structure is part of the royal palace or building, even a place for royal religious ceremonies of the same importance as Sanam Luang in Bangkok. It is on this hill that Phra Thaen Mananga Sila and the Ramkhamhaeng stone inscription were discovered in 1833.

A large smooth stone slab 1.2 meters wide, 1.6 meters long and 3 centimeters deep. According to the Ramkhamhaeng stone inscription, King Ramkhamhaeng the Great used it as a seat in public, where he dealt with state affairs on normal weekdays, while monks preached on it on Buddhist holidays.

The stone slab is now being kept in the museum of the Temple of the Emerald Buddha.

is a square polished stone block 45 centimeters wide and 1.11 meters high. Thai script from the Sukhothai period can be read on four sides. The interpretation of the inscription was King Rama IV initiative and was later continued by Professor George Codes.

This stone inscription as well as other discovered objects can be seen in the National Museum in Bangkok.

is located southwest of Wat Mahathat, protected behind the great laterite wall. The main pool inside the temple is behind another row of brick walls, surrounded by a stream. This prang has three towers; The middle tower is 20 meters high, while the other two have a height of 12 meters.

The temple was probably an earlier Hindu shrine, as a stone fall with a sign of the Hindu god Vishnu on Naga and a siva lingam made of bronze were discovered during the restoration in 1907.

However, a Lopburi-style Buddha statue was also found on the Vihan, which indicates the change of the shrine to a Buddhist temple at an unknown point in time.

is located on the west side of Wat Maha That, whose large stupa is very similar in style to that in Wat Maha That. It has a lotus flower tip and a base with Buddha images that were found here, all of which are in a walking position.

The statue of King Ramkhamhaeng, erected in 1969, represents the king on a Mananga Sila plate. Episodes from his life are depicted on the high base.

can be found about one kilometer north of the city wall. The main structure here is the Prang with three towers in the Khmer Bayon style from the time of King Jayavarman VII (1181 – 1217).

The Prang has four vestibules, three of which are only a facade and one has an entrance to the Prang. The stucco work over the doorway is considered to be particularly fine. In front of the Prang, the foundation of a Vihan with a laterite column foot remains.

There is also a ruin of a Stupa with niches on four sides. However, all the Buddha figures in it are already damaged. The stupa probably dates from the earlier Sukhothai period, as the Buddha statues have characteristics of both Chieng Saen and Sukhothai.

A gallery extends around the Stupa, the other side of which contains a brick Mondop with stucco Buddha figures. On the site there are other smaller Stupas of different styles, maybe up to 30.

This grouping of structures suggests that the square was once a Hindu shrine. According to Prince Damrong, the place was probably a Khmer city from before Sukhothai times. After the overthrow of the Khmer, the Thais built a bigger city elsewhere.

is located about two kilometers northwest of the city wall. Instead of a Stupa or Prang, the temple has a Mondop as the main structure. And this is what makes him remarkable.

The Mondop was probably built in the 17th century and contains a large seated Buddha whose characteristics are very similar to “Phra Atchana” mentioned in the Ramkhamhaeng stone inscription.

This Buddha statue, Phra Atchana, represents Buddha taming the Mara. The knee span is 11.40 meters. The Mondop itself is a square structure 32 meters wide and 15 meters high with walls 3 meters deep.

The left wall has a tunnel that extends to the top of the back wall. The ceiling of the tunnel depicts stories from the Jataka, which can be seen on engraved stone slabs with texts in Sukhothai characteristics. There was also another tunnel on the right wall that recently fell over.

The part of the roof, which is said to have been made of wood, no longer exists. Only the wall has been preserved. In front of the Mondop you can find part of a Vihan in the form of a brick wall. A smaller one is further north with a restored brick and stucco Buddha statue.

This temple is located on a mountain shoulder of 200 meters Height, about 1.5 kilometers west of the city of Sukhothai. A slate path leads up to the temple courtyard, where a brick Vihan stands on column feet made of laterite. In the middle of the back wall, there is a stucco and brick Buddha figure of 12.50 meters in a forgiving position, looking east.

It is believed that the Buddha statue is “Phra Atchana”, which is mentioned in the stone inscription.

This temple is located about 800 meters south of the old town. It was built sometime between 1292-1412. The temple area is surrounded by a wall on which a Mondop and the foundation of a Vihan stand. The four sides of the Mondop wall depict Buddha in four positions.

The balustrade of the Mondop and the gateway are made of stone. In front of the Mondop there is still the foundation of a Vihan. The bot itself is located outside this complex south of the temple. 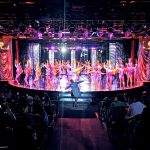 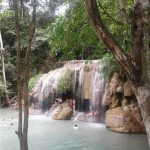 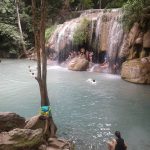